Using an integrated automation concept based on Siemens’ PCS 7 process control system, container glass manufacturer Wiegand-Glas reaps the benefits of production and energy efficiency that extends from the raw materials and hot end to auxiliary installations. Tobias Wachtmann explores the potential of plant-wide control system standardisation. The full version of this article appears in the July/August issue that has been mailed globally and is also now available free of charge in the digital archive*. 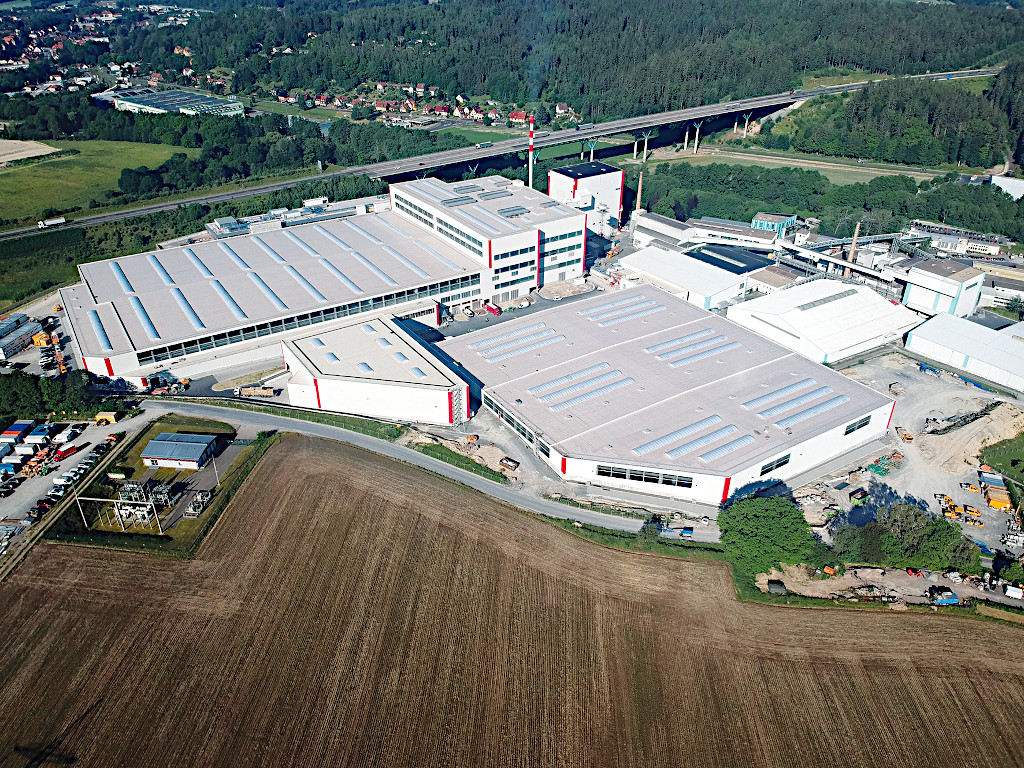 A family-owned business and one of Germany’s top three container glass manufacturers, Wiegand-Glas has three mainstays: environmental protection, sustainability and innovation. An impressive new glass foundry at the company’s Schleusingen location in the German state of Thuringia demonstrates how consistently Wiegand-Glas, under the direction of Oliver Wiegand and Nikolaus Wiegand, is pursuing these goals.

Following a construction period of less than two years, production has been underway in the factory since June 2020. The company’s second melting furnace is scheduled to enter operation at the end of 2021, after which it will be possible to manufacture 3.5 million bottles and jars per day. At the end of the year, the white glass furnace with four production lines for producing wide mouth and narrow neck containers will be joined by a brown glass furnace with three production lines for narrow neck containers.

Within the industry, the new plant – one of four belonging to the tradition-rich company that outputs over eight-million glass containers for the food and beverage industry every day – is already considered to be one of the most advanced in Europe and in the top echelon worldwide in terms of environmental protection and the use of cutting-edge technologies. Operations manager Stefan Böckel has no trouble providing proof: “As an example, we’ve invested heavily in emission control systems and energy recovery. From a technological standpoint, there’s our production machines that process four glass gobs simultaneously and produce 550 beer bottles per minute at twelve stations. These bottles then undergo a fully automated quality inspection and are also packaged at the cold end. An autonomous transport system then conveys the finished products to the warehouse.”

A sophisticated concept underlies all of these automatic processes. “Siemens was clearly our first choice, because the company has become the market leader for plant-wide automation solutions in the glass industry,” says Detlef Vieweg, head of the electronics workshop at the company’s Schleusingen location. “We were also convinced by the fact that Siemens is always refining its system to make it viable into the future.” In addition, the system’s ‘basic virtues’ ensure that almost automatically, PCS 7 is ready to go as an open, high-performance, and highly available system. Combined with network technology from the same company, it forms a reliable whole – a significant advantage when all conceivable disciplines have to be aligned with one another: batch, furnace, feeder, etc., but also auxiliary installations including the cooling system, filter system, water treatment and heat recovery – not to mention the integration of building services from Siemens Smart Infrastructure. All this is based on Simatic PCS 7, which is increasingly setting the precedent in the glass industry. The new construction project occupies a gross floor area of around 75,000m2, roughly the equivalent of eight football fields.

Working on a scale this large requires a general overview and experience. “Each of the various steps in glass production have their specific sequences and the manufacturing processes require an extremely high level of technological knowledge. As a result, process OEMs have specialised in individual plant sections and subplants, and have developed and refined their own expertise,” explains Dirk Ohlhorst, a project manager for Siemens. “As supplier of the plant-wide control system, one of our tasks was to coordinate the individual OEMs. We also ensured uniform standards for the hardware and software technologies and the interfaces used.” Fortuitously, Siemens was able to rely on a long-standing network of partners who know their business from the inside out and already function well as a team. This included STG Combustion Control as a partner for programming at the hot end, and Zippe Industrieanlagen, which was responsible for the batch house and cullet return system. Wiegand-Glas also commissioned highly experienced subcontractors such as Nikolaus SORG for the furnace and feeders and Sell und Seitec for the cooling systems and their automation. The mix also included plant builders PVAG, Rotamill, and Tri-Mer, whose systems were integrated into Simatic PCS 7. All this accumulated expertise made it possible to meet the ambitious schedule, despite restrictions due to the Covid-19 pandemic.

When multiple threads converge this perfectly, the result is a higher-level control system that guarantees uniform operation and data storage throughout all the automation stations in production. Such standardisation has long-term benefits for Wiegand-Glas. “The fact that we can now control and view everything from a central control room greatly improves the work and training of plant operators,” states Mr Böckel. A total of 380 employees work on site, and despite the growth in automation, 100 of these are new hires.
“This is because we now have more lines,” explains Mr Böckel.

Another advantage of PCS 7 is that “many parameters such as energy consumption per kilogram of glass are now immediately apparent, which enables energy-optimised operation of the furnace,” says Mr Vieweg. System performance has reportedly been “phenomenal”, with no downtime since June. Remote maintenance of uniform systems also reduces effort. All of this puts Wiegand-Glas in good stead to enjoy similar success following the construction of its brown glass furnace, scheduled to take place from May to November 2021.

Tobias Wachtmann is Head of Glass Business at Siemens

* The full version of this article appears in the July/August issue that has been mailed globally. To increase accessibility in the current environment, the digital version of this issue can be read free of charge in its entirety alongside back copies in the Digital Archive (sponsored by FIC) at https://www.glassworldwide.co.uk/Digital-Issues. To receive the paper copy, all future issues and a free copy of the new Who’s Who / Annual Review 2021-22 yearbook, subscribe now at https://www.glassworldwide.co.uk/subscription-choice