Since commissioning a second float glass production line in 2019, AGC Vidros do Brasil reports strong operational performance in its core float, mirror, coating and automotive glass fabrication businesses. Fabio Oliveira (President) and Isidoro Lopes (General Manager, Building and Industrial Glass for South America) highlight some of the organisation’s current activities. This article was researched and written prior to the spread of the Covid-19 pandamic and the full version appears in the July/August issue that has been mailed globally and is also available now free of charge in the digital archive*. 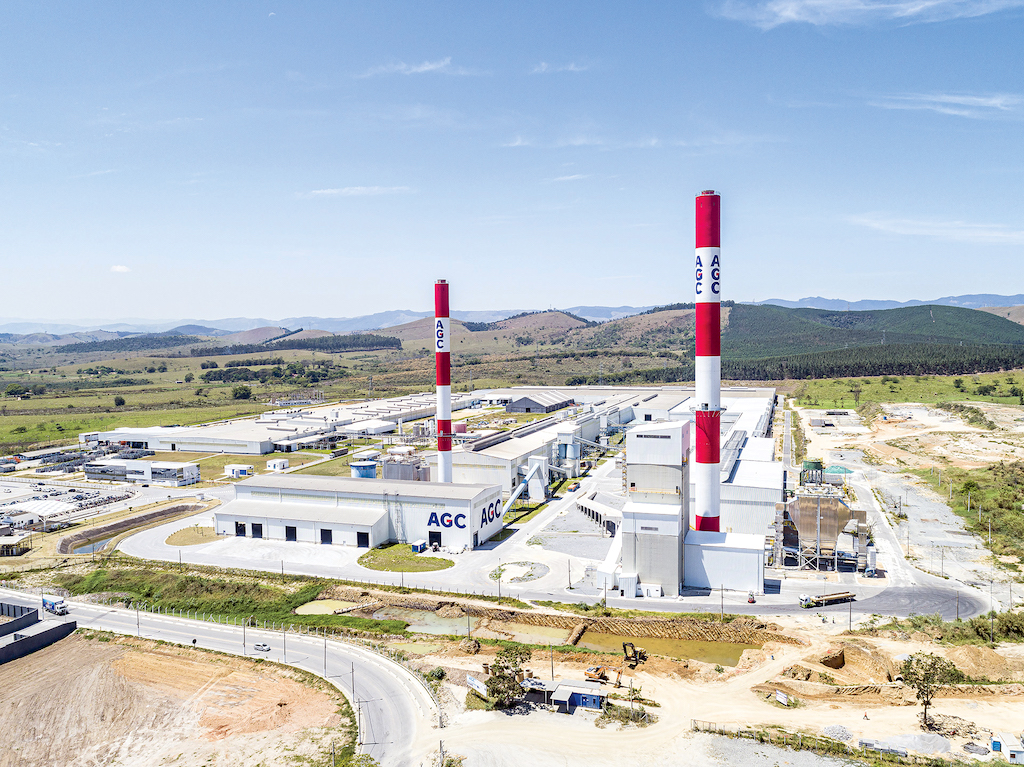 Located at Guaratingueta, mid-way between Rio de Janeiro and Sao Paulo, the AGC Vidros do Brasil industrial glass complex is conveniently positioned at the heart of the country’s industrial and business community. Almost every automotive customer is based in the surrounding region, as are many key construction projects.

When the site was opened in 2013, it represented an investment of more than €300 million, bringing together a 600 tonnes/day float line, a mirror silvering line, glass processing facilities and a dedicated automotive glass plant. Subsequently, a specialist coating line has been installed to make a range of solar control glasses and in 2019, a second (850 tonnes/day capacity) float line was commissioned. Production capacity currently stands at 1450 tonnes/day, another €147 million having been invested to realise this expansion since 2016. Separately, two added value automotive glass plants are operated in Betim (Minas Gerais) and Piracicaba (Sao Paulo).

According to Fabio Oliveira, President, local suppliers were selected primarily for civil works and the assembly of equipment based on experience gained from phase one of the Guaratingueta project. “The selection of suppliers for critical materials and equipment, able to guarantee high quality levels on the entire production line, was based on the AGC Group’s long experience, focused on the creation of longstanding partnerships with companies throughout the world” he added. “Furthermore, specific and accurate internal laboratory controls were made by in-house specialists on the most critical components, including the refractories for furnace construction.”

The plants are equipped with state-of-art equipment for environmental protection and control, in-line with the AGC Group’s international requirements. Furthermore, Mr Oliveira confirms that the Brazilian market is increasingly approaching world standards that encourage the conscious use of glass, reinforcing energy savings, consumer safety and comfort.

Fabio Oliveira has been a senior AGC executive since 2011 and has worked in the industry for 15 years in total. He joined as Chief Financial Officer to AGC Brasil´s Global Foundation Team and was subsequently also made responsible for legal, human resources, internal controls, information technology, procurement and safety activities, as well as the management of quality systems and infrastructure. “I am very proud to be number five on the AGC Brasil list of employees!” he confirms. And in early 2017, following the reassignment of then President Davide Cappellino, Fabio Oliveira was named as his successor, in addition to his role as SA General Manager of Finance and Business Support.

AGC employs approximately 1100 people in Brazil, including a small number involved in the group’s chemicals business. The remainder are associated with the production of float, mirrored, coated and automotive glass products. Since starting up the second float line and generating an additional 200 jobs, AGC has emerged as one of the Guaratingueta area’s largest employers. “Counting on partnership with local technical schools and universities, all new employees received training on technical, safety and compliance with industry standards” Mr Oliveira explains. “AGC Brasil has being investing consistently to keep our people updated and prepared to support our sustainable growth and high levels of productivity.”

Working alongside Fabio Oliveira, who is responsible for the AGC Vidros do Brasil legal entity and for co-ordinating the group’s businesses throughout South America, is an experienced senior management team. This includes Isidoro Lopes, General Manager of the Building and Industrial Division, Joao Siqueira, General Manager of the Automotive Division and Ichiro Yamanouchi, who heads the Chemicals Division.

Isidoro Lopes started his career on the production shop floor as a tempering glass operator and has held various managerial positions in the industrial field of glass processing since the early 1990s. At AGC, he was previously Operational Excellence Director within AGC Glass Europe for three years, before his appointment as General Manager for Building and Industrial Glass in South America earlier this year.

According to Mr Lopes, there are important signs of improvement within the Brazilian flat glass market. “The civil construction index shows growth potential for 2020/2021, in addition to which the local automotive business is forecast to grow by 12% between 2020 and 2024. Low interest and inflation rates and the return of government-financed infrastructure investments are creating particularly good conditions for growing opportunities in the civil construction sector especially.”

In addition, Isidoro Lopes confirms that exports represent an important part of the company’s growth strategy and that the strong operational performance of the Guaratingueta float plant is helping AGC to unlock this potential. “We are able to apply the best technologies and practices available within the group, in addition to which the team’s preparation and motivation to address current challenges are outstanding” he adds.

Although it may be too early to discuss further expansion of the Guaratingueta operation, Fabio Oliveira is confident that AGC will ultimately follow this path. “Historically, the Brazilian glass market grows at between two and three times the official GDP. We expect to achieve a stable and robust growth rate year-on-year” he confirms. “Some of this growth is driven by a housing deficit that has been close to 7.7 million houses in the last decade. The conscious usage of glass in order to reinforce safety, energy saving and greater thermal and acoustic comfort are strong factors that will certainly encourage us to look towards more expansions in the future.”

* Alongside exclusive interviews with Encirc, Guardian, NSG, SGD Pharma, Saint-Gobain, Sisecam and Verallia + the latest news, technology and market information, the full version of this article appears in the July/August issue that has been mailed globally. To increase accessibility and visibility of all our content in the current environment, for the foreseeable future the usual subscription fee for Glass Worldwide’s Digital Archive (sponsored by FIC) has been waived, meaning you can access the July/August issue free of charge alongside back copies at https://www.glassworldwide.co.uk/Digital-Issues. To receive the paper copy, all future issues and a free copy of the new Who’s Who / Annual Review 2020 yearbook, subscribe now at https://www.glassworldwide.co.uk/subscription-choice