As the Executive Board Member of the Ciner Glass Group, Didem Ciner has recently taken over the leadership of ambitious plans to expand the glass container production activities in UK, Europe and US. Outlining the proposed European investments, Mrs Ciner spoke exclusively to Glass Worldwide about her plans for the first greenfield container glass sites to be built in Europe for over 15 years, as well as the next expansion phase at the group’s existing Park Cam operations in Turkey. The full version of this article appears in the July/August issue that has been mailed globally and is also now available free of charge in the digital archive*.

GW: What is the motivation for the Ciner Glass Group to expand its glassmaking operations beyond Turkey?

We are planning to expand our current business operations into European markets where the demand for glass bottles is increasing. I am confident that the recovery from the pandemic in developed markets we are already seeing will only continue to grow in scale and speed, although the decision to expand our glass production from Turkey across Europe was taken before the onset of the Covid-19 pandemic.

At the same time, our existing operations in Turkey are also being expanded. Park Cam is already Turkey’s second largest glass producer and has built an extensive network of domestic and international customers.

GW: How is the investment into Europe being structured?

The headquarters of our new European glass business is in London. Ciner Glass is 100% owned by the Ciner Group and the assets and capital for our European investments will be directed through our UK operations. The group’s existing track record of success helps provide strong and stable foundations for this investment. Our aim is to have secured agreements with customers in advance which will account for at least half of our increased proposed production capacity.

Our aim has never been to disrupt local markets. We estimate that in Europe imports of container glass into the region have been increasing by 15–20% year on year since 2018. In fact in Turkey, our production has helped to reduce glass container imports into the country.

The pandemic has only temporarily served to slow that trend, but as levels of normal activity return in the coming months, we expect to see both a significant increase in demand in a very short period and a shortage of capacity. In our judgement, this is the right time to expand our operations in Europe.

GW: What feedback and commitments have you received from potential customers for the expansion into Europe and how involved have they been in the process?

As reported at the time in our previous interview with Glass Worldwide [September/October 2015], we finished our second furnace at the state-of-the-art Park Cam plant in Bozuyuk in 2015 as the Turkish market was growing very quickly.

Our high quality standards and technological expertise have enabled us to produce bottles for the Turkish domestic market which are at least 5% lighter compared to other container glass producers.

This achievement brought us to the attention of global brands. In 2018 we engaged with one of the biggest global beer producers in Turkey interested in using our light-weight technology. Over a period of 12 months we managed to reduce the weight of their 330ml long-neck beer bottle from 200 grams to 180 grams, making it the lightest 330ml long-neck beer bottle on the market available anywhere in the world.

So, with our products in such demand from customers, the best solution to the logistical and operational challenges of supplying European markets was to look at constructing greenfield plants in Europe.

Our innovative technology can produce glass more efficiently while reducing transportation costs and cut CO2 emissions. Currently, we are exploring the potential of investing in two different European locations which could be in Belgium and also potentially in the UK.

GW: What can you tell us about the proposed greenfield investment in Belgium?

We have signed an option agreement to purchase land in Lommel in the province of Limburg. We have applied for construction and environmental permits and the Belgian government has been very supportive. Located nearby is one of the major silica sand quarries in Europe which helps again to reduce our CO2 emissions.

Our main intention will be to supply glass bottles to the beer and wine markets. We are considering the construction of a state-of-the-art plant with two furnaces. Currently, the food and beverage industry in the region has to import bottles in large quantities. This potential largescale production will offer advantages both in terms of supply and cost. It is envisaged that the Belgian plant would provide technical support and assistance for the entire group. A fully electric furnace producing up to 80–100 tonnes of glass a day would be constructed to focus on R&D development.

From the outset in Belgium, our team will target carbon neutral production and are already hard at work on a roadmap to reach that goal. Even if it is not achievable immediately, we commit to taking the necessary measures within the shortest time possible. The proposed plant will have the advantage of being located in Europe’s biggest solar park with at least 100 megawatts of renewable energy readily available. 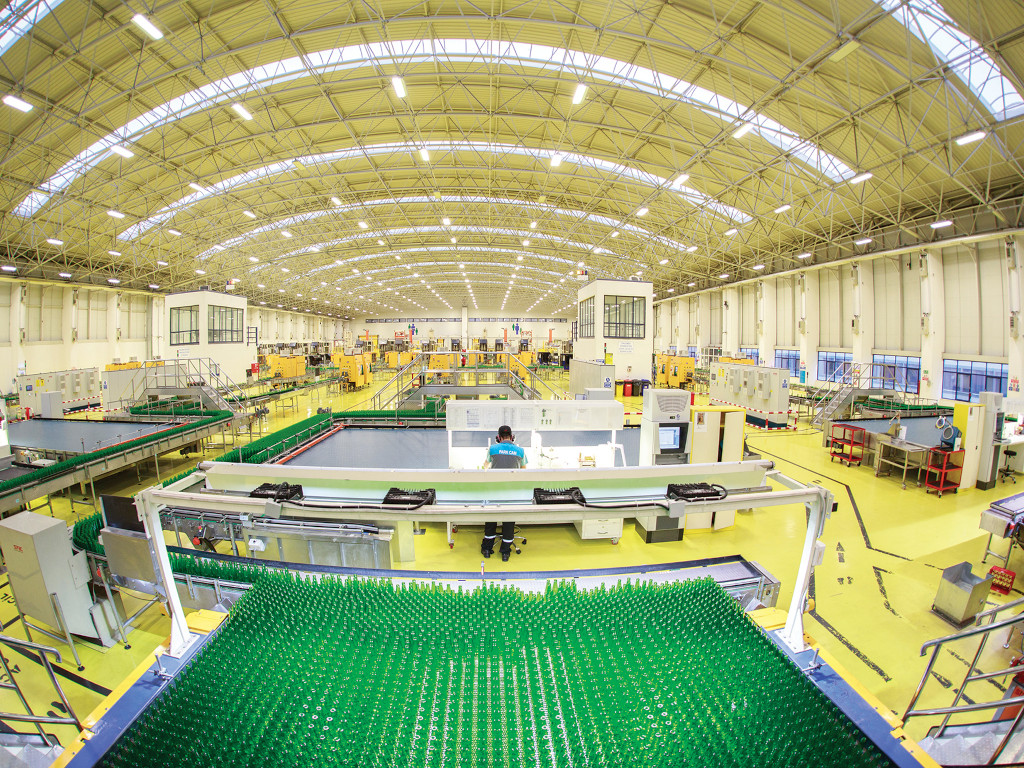 GW: And what are the proposed plans for the greenfield plant in the UK?

Our other potential proposal being considered is an additional state-of-the-art plant which could be located in South Wales.

We are closely evaluating our business plan in the region. In addition to the beer and wine sectors, in Wales we are also targeting the other beverage markets. South Wales is well positioned to serve the existing UK operations of our customers.

We wish to support plans for a Deposit Return Scheme (DRS) in Britain and are already planning to align the scheme with our investments to close the loop for the circular economy for glass. Ciner Glass is committed to cutting carbon emissions further and faster than our competitors. To reach the goal of carbon neutral production in the UK and Belgium we are formulating both our short-term and long-term plans.

GW: Has Brexit affected your plans for the UK investment?

The impact of Brexit is not relevant to the development of this project. Our focus is on UK domestic and local markets. There has not been an intention to construct a glass production facility in Wales of this scale for a generation.

GW: What are the main challenges and opportunities for the proposed European projects?

Ciner Glass wants to reverse the long-term trend which has seen only limited investment into the European glass production sector in recent times, particularly in new facilities as distinct from upgrades in existing plant and machinery. Our planned capital investment costs will be high because of the scale and the advanced technology we hope to employ. But our investments in European glassmaking have the potential to be transformative for the local communities where we establish our production. These European locations have strategic advantages but also present challenges such as the long duration of permit procedures. But being closer to our markets benefits the environment and reduces the cost to the consumer.

We Soda, which is part of the multinational operations of Ciner Group, is our soda ash business which started in Turkey, expanded to the US and has now become the largest soda ash producer in the world. Although the soda ash and glass production operations will be kept distinct and separate, the combination of Ciner Glass Group’s experience and expertise in Turkey will enable us to deliver on our expansion plans. As with the soda ash business, we want to grow very fast and have ambitious targets for our European production.

GW: Will there be additional challenges in identifying and recruiting suitably qualified personnel in Belgium and the UK?

Ciner Glass is proud of the intensive training and development programme we have created with our technology suppliers. In Turkey it has proved to be highly successful at our Park Cam facility. We took the decision to employ only a small percentage of staff with previous experience in the glass industry and decided instead to train for ourselves the hundreds of people we needed.

Our preferred strategy is to employ young people from the local community who don’t have preconceived ideas about ‘old fashioned’ glass manufacturing. Ciner Glass wants to hire people with open minds with whom we can share our values of working together as in a family.

GW: Will the Park Cam blueprint be adopted at the new plants or are completely different models needed?

We are very proud of our plant in Turkey but want to build on that success in any new locations. We are making some design modifications to ensure the efficiency and effectiveness of the buildings will be even more innovative and cutting-edge than in Bozuyuk.

GW: You also mentioned continued investment into the Park Cam operations in Turkey?

Our expansion into Europe is not at all at the expense of our advanced manufacturing operation in Bozuyuk, which is located mid-way between Ankara and Istanbul.

Bozuyuk has been recognised for its quality and high production efficiency levels. Due to increased demand, boosted further during the pandemic, we are increasing production capacity there as well.

As we stated in our last interview back in 2015, the greenfield Bozuyuk production site was designed to accommodate future expansion of production, in addition to the two 500 tonnes/day furnaces which were built at that time. Construction of the third 500 tonnes/day furnace in Bozuyuk is already complete and in the first half of 2022 we also aim to start the construction of a fourth furnace, to be located near our soda ash plant in Ankara.

The environment assessment of that fourth project has recently been approved and construction has now started. At 650 tonnes/day, it will be the biggest end-fired regenerative furnace in the world.

Being integrated with our soda ash plant, there are additional logistical benefits from the location of the fourth furnace in Ankara. A railway will be built to deliver raw material deliveries to our glass production facility and we will have the added advantage of integrating our electricity supply.

For the third furnace project in Turkey we are considering using the same consortium as for the original investment, but the proposed fourth furnace in Turkey, as well as in Belgium and in the UK would be open to tender.

GW: In addition to the proposed Belgium and UK projects, do you expect to create similar glass factories in other parts of the world such as the US and if so, in which regions and in what timescale?

Although it is too early to discuss, there is another location under serious consideration. We are in discussions with customers and are already looking at suitable locations. You can expect to hear a great deal more about Ciner Glass in the future.

The full version of this article appears in the July/August issue that has been mailed globally. To increase accessibility in the current environment, the digital version of this issue can be read free of charge in its entirety alongside back copies in the Digital Archive (sponsored by FIC) at https://www.glassworldwide.co.uk/Digital-Issues. To receive the paper copy, all future issues and a free copy of the new Who’s Who / Annual Review 2021-22 yearbook, subscribe now at https://www.glassworldwide.co.uk/subscription-choice