As fibreglass becomes an increasingly popular and necessary product, manufacturers face pressure to meet targets whilst running an energy-efficient operation. Mikael Le Guern and Amber Watkin delve into Eurotherm by Schneider Electric’s high efficiency solution for bushing power control during the melting process. The full version of this article appears in the May/June issue that has been mailed globally and is also now available free of charge in the digital archive*. 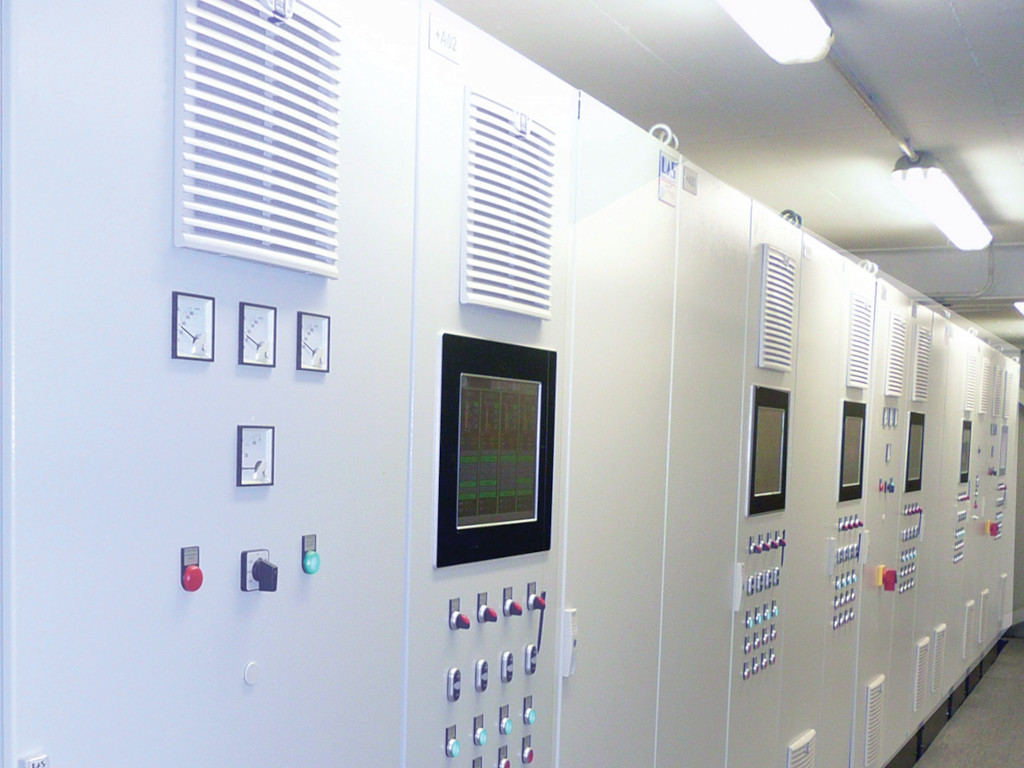 In order for the glass industry to meet its decarbonisation goals, legacy fossil fuel fired processes will need to transition to hybrid (gas/electric) or all-electric melting technologies. The control solutions for these electrically powered systems will need to be as energy and cost-efficient as possible, which means moving away from traditional designs. In the case of glass fibre manufacturing, advanced power control designs are already available for platinum bushings, enabling significant energy savings with fast return on investment.

The popularity of fibreglass reinforcement has resulted in the bushings used in the melting process becoming larger, requiring additional power and more precise temperature control. Modern bushings require up to 90 kilowatts of power and need to operate at around 8 volts at currents of up 10,000 amps due to their relatively low resistance. These high current levels can only be supplied by using special transformers and high current busbar systems. In traditional bushing control systems SCR (Silicon Controlled Rectifier) power controllers (also known as thyristor controllers) supply power using the phase angle firing method, which provides smooth control to the bushing.

However, the nature of phase angle control is electrically noisy, causing distortion of the AC waveform (known as ‘harmonics’) in the transformer and cables of the system. The harmonic distortion causes extra voltage and current to be present in the cables, which not only wastes energy through excess heat loss but also negatively affects the measurements (for example, power factor) made by electricity suppliers in order to charge for energy.

To achieve an acceptable power factor close to 1, the thyristor controller needs to supply as clean a waveform as possible with the least amount of harmonics. In this case, a power demand setpoint somewhere above 80% of range. However, in an average bushing application, at least another 10% of control either way is required in case the bushing temperature needs to be adjusted quickly after an incident.

Experienced supplier of power and control technologies Eurotherm by Schneider Electric has developed a high efficiency solution for bushing power control. The Eurotherm approach considers each part of the system from the process power supply to the ‘ears’ of the bushing and up to the information management system level. Starting at the power controller, rather than using phase angle firing mode which ‘chops’ the waveform causing harmonics and negatively affecting the power factor, the Eurotherm EPower advanced power controller is used in automatic load tap changer control mode.

The load tap changer feature automatically switches transformer taps dynamically. Supplying the power in this way provides a more complete sine wave rather than the ‘chopped’ wave seen using phase angle on its own. With appropriate tap selection, on which Eurotherm engineers can advise, the harmonic distortion can be significantly reduced, helping to keep the power factor typically above 0.94 – much higher than a regular SCR controlled system. As a result the total harmonic distortion (THD) reduction is substantial – typically improving from 50–60% or more during normal operation to less than 15%.

Extra power demanded at the bushing is supplied when the second tap is switched on in phase angle mode by Eurotherm algorithms that continuously calculate and automatically select the best tap arrangement to fit the situation. The EPower controller is capable of controlling multiple thyristor stacks attached to multiple taps of a transformer dynamically instead of having to carry out laborious manual tap changes, allowing seamless control from 0–100% power demand whilst maintaining the best possible power factor at all times. On bushing applications the automatic load tap changer function with two taps is sufficient to provide meaningful energy saving whilst balancing the capital expenditure with the return on investment.

To minimise unscheduled downtime the dual redundant feature of the T2750 PAC (a secondary processor that takes over control in the case of a problem in the primary processor) can offer high availability of the system, as well as redundant inputs and output modules if required.

In a 24 bushing position control system upgrade for a leading glass fibre manufacturer, the Eurotherm bushing power supply solution achieved a 9.4% power saving. During an initial trial, two of the bushing positions were modernised to assess the possible improvement. The system was run in full operation for several months to compare the performance and efficiency of the two bushing positions fitted with the Eurotherm load tap changer solution, against the other 22 positions. Four bushings were controlled by each control panel, which contained four EPower controllers and a local panel PC HMI. Several of these bushing control cabinets were attached to a single mains power distribution cabinet to create an integrated and flexible solution suitable for almost every glass fibre forehearth configuration.

The trial bushings employing the cleaner power waveform supplied by the EPower controller with load tap changer, in combination with low inductance busbars and transformer, showed a dramatic reduction of harmonics. This led to a 50% improvement in power factor and reductions of 40% in line current; 51% in kVA (apparent power), and more than 9% in real power (kW) compared to the regular phase angle controlled position. The result in cost savings was significant.

Bushing positions with the automatic load tap changing system installed consumed only 9.6kW against the normal bushing positions’ consumption of 10.6kW. The result correlated with the load tap changer-controlled position achieving a 9.4% total real power saving, which in this case equated to a saving of €21,000 per year (based on 0.1 euro/kWh, continually running 24 bushings). The ROI was approximately 18 months.

In a traditional system vibrations can cause weakness in the glass fibre strands and can also eventually cause damage to system components including the bushing itself. There were noticeably fewer vibrations in the improved system due to the reduction of harmonics. This improved the yield by reducing fibre breakage and enabled the system components to naturally last longer, reducing the time and cost of maintenance. The EPower load tap changer option also saved time for the engineer by automatically switching power to the transformer taps. This was normally a manual task that interrupted the process during changeover. After the successful completion of the trial phase, all 24 positions were modernised to the Eurotherm solution, and the system was designed with future scalability built-in if required.

With an improved power factor, capacitor banks are no longer necessary which helps with CapEx and ROI and further reduces maintenance cost. On a new installation with the line current typically reduced by 40% per position and kVA less than half compared to a traditional SCR controlled system, significant capital cost savings can also be achieved by reducing the size of all components, from the main distribution transformer to circuit breakers and cables.

On refurbishment projects the Eurotherm bushing control solution with automatic load tap changer design helps to enhance each part of the system to achieve improved energy efficiency and glass fibre quality by significantly improving the power factor and reducing total harmonic distortion (THD) all with an acceptable return on investment. The energy savings over the lifetime of the system (typically 15 years) are substantial. Energy assessments can be carried out to calculate expected ROI and the solution can be fitted in modernisation steps to suit budgetary requirements. Even larger capital savings can be achieved on new installations through the appropriate design of the complete system. For glass producers ready to transition to more efficient technology, Eurotherm can help.

* The full version of this article appears in the May/June issue that has been mailed globally. To increase accessibility in the current environment, the digital version of this issue can be read free of charge in its entirety alongside back copies in the Digital Archive (sponsored by FIC) at https://www.glassworldwide.co.uk/Digital-Issues. To receive the paper copy, all future issues and a free copy of the Who’s Who / Annual Review 2021-22 yearbook, subscribe now at https://www.glassworldwide.co.uk/subscription-choice