Towards the end of 2019, Verallia completed a €24 million investment at the group’s specialist glass food packaging production site in Lagnieu, located some 50km north east of Lyon. A project involving rebuilding one of two furnaces and modernising the associated production lines, this is the latest in a series of important Verallia investments in France, valued collectively at more than €200 million in the past four years. The full version of this article appears in the January/February issue *. 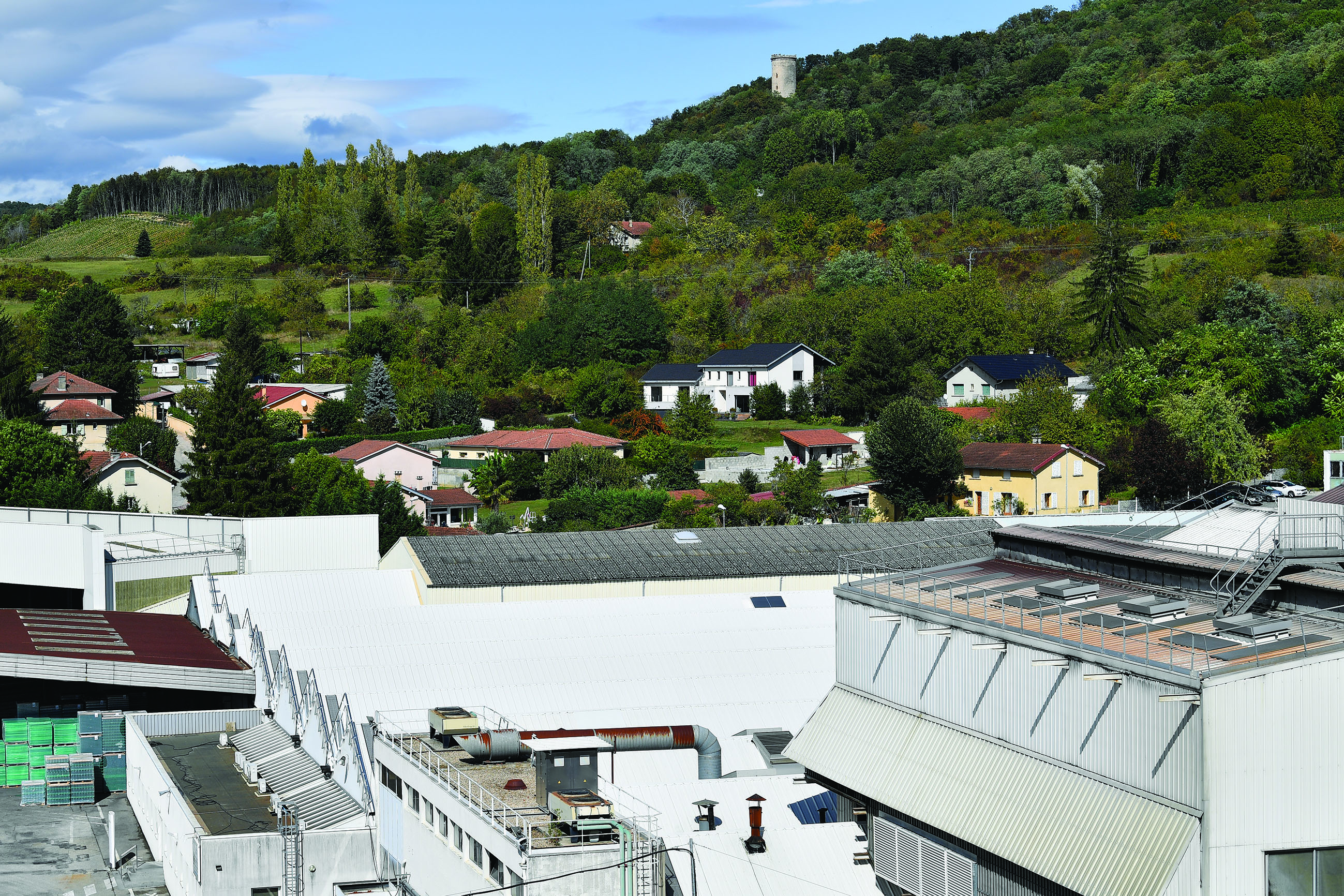 Verallia is a European leader, the second largest player in Latin America and the world’s third largest producer of glass packaging for food and beverages. Employing nearly 10,000 people and serving in excess of 10,000 customers globally, the group maintains a flexible and responsive industrial base, with 32 factories (including seven in France), to produce 16 billion bottles and jars every year. The organisation also has three integrated decoration plants (two in France and one in Poland) and eight waste glass processing centres, two of which are also located in France to transform collected glass into furnace-ready cullet.

Verallia France is highly active in the still and sparkling wine sectors. It is also a major player in the spirits, soft drinks and food markets. Its seven glass factories offer a range of standard and specific products to a diversity of customers, including both small locally-based companies, such as regional wine producers and local breweries, as well as such leading multi-nationals as Pernod Ricard, LVMH, Heineken, Andros and Nestlé.

To offer the level of service, quality and competitiveness that markets demand, Verallia constantly maintains and modernises its industrial facilities. Every year, the group invests on a recurring basis and outside exceptional projects, with a target of approximately 8% of annual revenue. Within the past four years, the group has invested more than €1 billion. Some €200 million of this total has been spent in France since 2016 at the Chalon, Cognac, Lagnieu, Oiry, Saint-Romain-le-Puy, Vauxrot and VOA-Verrerie d’Albi glassmaking sites and at the Everglass subsidiary (Rozet-Saint-Albin and Châteaubernard) cullet treatment plants.

The most recent of these projects was completed at the Lagnieu (Ain) glassworks last spring, a facility that has specialised in the production of food jars since 1976. The factory (pictured) itself dates back to 1924 and is recognised as the first European glassworks where the manufacture of pharmaceutical vials was fully automated using Lynch machines.

Employing some 300 people, the food container specialist now produces approximately four million jars every day from two furnaces. In particular, heat-sealable, sterilisable and pasteurisable glass jars are made. Two solutions have been developed since 2016, for example, to make heat-sealable glass packaging compatible with the pasteurisation and sterilisation stages at customer sites.

The Lagnieu site produces containers in sizes from 2.9cl (miniatures) to 3.1 litres, its latest launches illustrating the plant’s expertise in engravings and complex shapes that require a high level of technical expertise. Customers also choose the products manufactured to offer consumers products that are 100% ‘made in France’ (content and container). This is the case, for example, for Reitzel Briand with its Le Jardin d’Orante brand, which sells pickles sown, harvested, prepared and packaged in France with French ingredients and packaging. Verallia supplies the brand with a variety of jars and is the exclusive supplier of the 42.5cl format.

Another Verallia customer positioned in this niche is the Breton dessert producer Marie Morin, for whom Verallia manufactures such products as a 20cl glass bottle that evokes the shape of a Champagne bottle (for a custard) and a jar specially designed for Marie Morin, while taking inspiration from the jar shape already used for large portions (the jar for a pack of three small glasses to compose a personalised gourmet coffee dessert).

Located on the Ain plain, in the heart of industrial Europe, the plant’s central location allows deliveries throughout France and Western Europe. Customers operate in many food product sub-categories, including jam, honey and fruit products, spreads, dairy products, preserves, condiments, sauces, oils and vinegars. Verallia is also a supplier of glass jars to the baby food market. And in order to support customers in the expanding snacking market, the group offers a range of heat-sealable jars, such as heat-sealable, sterilisable and pasteurisable glass jars or cassolettes, for prepared dishes, baby food or heat-sealable glass jars with transparent covers for yoghurts, dessert creams and other soluble products that have been sealed with aluminium covers.

The Lagnieu plant also supported Andros in launching the first compote in the refrigerated section of its Bonne Maman brand, available in French supermarket shelves since October 2018. For more than two years, Verallia’s teams have been working on this development to meet Andros’ expectations. In particular, the Research and Development Department has undertaken considerable work on the heat-sealed cap.

The latest €24 million Lagnieu plant modernisation involved rebuilding one of the site’s two furnaces with the same capacity as its predecessor (approximately two million jars/day). This reconstruction was an opportunity to use the latest technologies and materials, making the construction more energy efficient and environmentally-friendly. The furnace has been equipped with an advanced combustion control system that promotes homogeneity and reduces hot spots. In addition, the furnace control room has been renovated with respect to acoustic insulation, air conditioning and thermal insulation, as well as workstation ergonomics.

Three of the five IS machines were replaced and all machines now integrate servomotors to achieve highly sensitive movement during transfer from the blank mould to the blow mould and subsequent take-out functions. Two annealing lehrs were also replaced. They are better insulated and consume less power than their predecessors.

The cold end was overhauled completely, featuring two new palletisers and pallet stretch hooding machine. In addition, the 4500m2 cold end roof has been completely renovated.
Sensors installed throughout the production lines contribute to the regulation of production in real-time. This approach is intended to stabilise production and quality, while optimising energy consumption.

The Lagnieu plant employs approximately 300 people and some 20 temporary workers. In the past four years, in the region of 40 people have been employed in maintenance (electro-mechanical engineering positions) and production (machine operator and quality control positions). This presented an exceptional opportunity to deploy an ambitious training programme, organised on four main areas:

In total, more than 190 people were trained over a period of two months, representing more than 1000 hours of training provided.

Speaking at a specially organised inauguration ceremony in Lagnieu last October, Michel Giannuzzi, Chairman and CEO of Verallia, commented: “With this new equipment, the Lagnieu plant has a state-of-the-art industrial tool to manufacture glass containers for food, a market in which Verallia believes and invests over the long-term. This modernisation illustrates our sustained investment policy, which allows us to maintain the operational excellence of our production facilities. Furthermore, this project is fully in line with our objective to establish ourselves as the preferred supplier of glass packaging.”

* The full version of this article appears in the January/February issue alongside a broad cross-section of editorial that assists with all areas of production and processing. Whatever your company's area of glass making expertise, this issue will provide you with balanced coverage of the latest news, technology, profiles, market information and events. Subscribe now to receive the full paper and digital versions (subscribers receive a free copy of the Who’s Who / Annual Review yearbook!).