Making adjustments for a decarbonised world

The technology exists for major advances in reduced-CO2 glass production; hybrid and superboosted furnaces are making progress, but high electricity rates could compromise plans for all-electric vertical melters. Stuart Hakes looks at some of the issues surrounding the future of the glass industry. The full version of this article appears in the Sept/Oct issue that has been mailed globally and is also now available free of charge in the digital archive (sponsored by FIC)*. 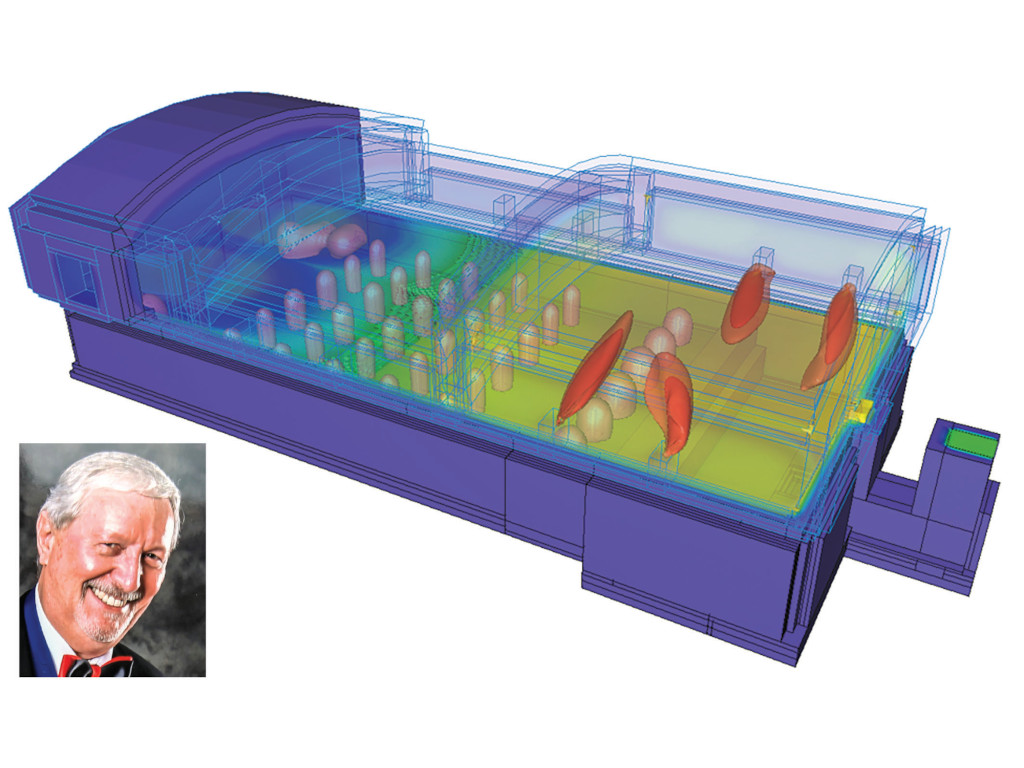 Adverse weather conditions in New Zealand, China, USA, Canada, Belgium, Germany and Switzerland amongst many others this summer surely underline to us all that the necessity to reduce the amount of carbon dioxide going into the atmosphere is the utmost priority. The problem is, of course, that this comes with many hard decisions which have to be made.

If the glass industry is to play its part – with all of the major developments over the past few years, which have resulted in nearly 25% reduction in CO2 emissions, we are still producing 1.5 million tons/year of CO2 from our process.

To meet the commitments that various governments are setting, whether they be EU targets, British targets or United Nations climate change targets, requires the glass industry to make a major impact in our future CO2 emissions, equivalent to approximately another 50% from where we are now. There are obviously financial impacts as well as technical impacts and as long as the glass industry remains ultra conservative, it is difficult to see how the correct decisions will be made.

It is not without some bright spots. The setting up of the Glass Futures furnace in the UK with an international assembly of companies in both the hollowware and flat glass fields and the Furnace For the Future container furnace (F4F) by FEVE show fantastic faith by some very able thinkers. This is to be applauded. However, the Boards of Directors who have to sign off on the results of these demonstration projects are probably a long way from being on-board, governed as they are by the necessity of delivering shareholder’s returns and being ultra cautious.

How will the industry look in the future?

There is no doubt that there now is very much a consensus that hybrid furnaces are the way forward and these are described in more detail below.

We all know that for furnaces up to about 250tpd that cold top, all-electric vertical melters are by far and away the most efficient way of producing glass. The reason that cold top all-electric furnaces are so super efficient is quite obvious. There are no regenerators to heat and no superstructure as a batch blanket is established on top of the melt that effectively seals all the heat into the melt itself – the very top layer being a thick layer of batch, typically about 100mm thick followed by a reaction layer followed by a refining layer. This is clearly vertical melting and gives stunning energy efficiencies of approximately 2.6GJ/t for very small furnaces, anything between 25–80tpd.

However, there are a number of negative factors, including lack of turn-down ratio (in other words the ability to go from zero pull to maximum), shorter furnace campaign lives, some perceived issues with reduced glasses such as amber, dead leaf green, etc. and the current high cost of electricity. I have argued for a long time that shorter lives should not be an issue as the rate of technology change is so great that locking ourselves into a 20-year furnace life span makes no sense. The other issue with a 20-year life span is that the furnace is very expensive in order to make it last that long.

Because we do not have to concern ourselves with regenerators, which are arguably one of the first areas to clog up, locking ourselves into a 10-year life for an electric furnace, without the expense of regenerators means that the payback in terms of building and operating an all-electric furnace for 10 years becomes much better than the older model. It is now quite common for cold top all-electric furnaces to last eight years and with the advance in technologies I am confident this can be pushed to 10 years and beyond. The issues of dealing with reduced glasses are not nearly as difficult as is believed.

The price of power

For a long time in the 1970s with the first oil shock, many all-electric furnaces were built specifically to melt amber glass and to avoid the issues they were normally operated as semi hot-top; in other words, the establishment of a thick blanket to hold the heat in was not proceeded with and by using normal screw-chargers and redesigning a superstructure, heat could escape above the surface and allow pre-heating of the batch. These hot-top and semi hot-top all-electric vertical melters made amber glass perfectly.

It remains therefore that the greatest drawback to all-electric furnaces is the cost of electricity and currently the UK has one of the highest rates of electricity pricing in Europe. This is the greatest drawback and I know much representation has been made by the high energy industries to address this anomaly and in particular its cost in relation to natural gas. How effective this will be long term really determines how the industry can respond to decarbonisation. Unless steps are taken to reduce the price of electricity the industry cannot decarbonise. It is as simple as that.

We also know that in terms of energy efficiency, big is beautiful and that bigger furnaces are inherently more efficient. Most of the container furnaces nowadays are bigger than 250tpd and are more energy efficient than smaller furnaces but these sizes exceed the practical limit for cold top all-electric vertical melters. So, it becomes obvious that these cold top all-electric vertical melters are only a small part of the answer for the industry to decarbonise going forward.

The majority of major container manufacturers and in particular all of the flat glass industry have much bigger furnaces; typical size for a float glass furnace is between 600–800tpd and many are being built at 1000––1200tpd. Trying to set up a cold top all-electric vertical melter with the melt area suitable for a furnace of that size would require an enormous glass depth and is probably a technical advance too far. Whilst it is technically feasible, the furnace life with all the horizontal joints and the construction costs make it extremely unlikely. So the question is how do we move the industry going forward? The answer, is of course, as I intimated earlier, a horizontal hybrid electric melter.

It is very encouraging to see that virtually all furnace builders and boost suppliers have now come around to a hybrid melter. This has come about because Computational Fluid Dynamic Modelling (CFD) has shown this to be the most efficient way forward. It is very interesting to see that even though there are differing CFD modelling systems being employed, they are all now converging on something very similar to each other.

So, what is a hybrid all-electric melter? Well basically this is an all-electric melter but instead of being vertical melting it is horizontal melting, meaning that the furnace size is very similar, if not identical to the footprint of the existing fossil fuel fired melter.

The in-glass electrical melting component is maximised at around 80% of the total energy. The remaining 20% of the energy has to be supplied by some top heat – either more electricity from elements or by burners. This top heat is required for controlling the glass quality.

Obviously, the furnace has to be decarbonised, which eliminates entirely any form of fossil fuel and I would also suggest eliminates bio-fuels. I think we are deluding ourselves when we believe that using bio-mass, which is a renewable resource, is saving the planet because the amount of bio-mass that we consume in a single day, and the length of time it takes to grow a tree or whatever to replace that is entirely disproportionate. Besides which we are still producing CO2, and in global warming CO2 is the problem. Therefore, we have to entirely eliminate any kind of bio-mass, which means that the heating is going to be either electric or hydrogen.

So, from the above it can be seen that the majority of the existing furnaces can go through a transition stage whereby more boost is added to the furnace, which is termed superboosting, and then at some stage change the regenerative furnace to an oxy-fired furnace and then the final step to a hybrid furnace.

Hybrid furnaces are typically envisaged to be running at a maximum of 80% in-glass heating by Joulean heat through molybdenum electrodes and around 20% by heating above the surface. All of the modelling shows that this heat is required in the refining area, which is the downstream portion of the melter. Most modellers recognise that different crown heights makes sense but we need to look at the other issues.

These are principally the refractories required if we are to burn hydrogen in the furnace but that is for another paper. There’s much more to say!

In short, the technology exists for major advances in decarbonisation; the modelling proves it is safe. A small number of furnaces are already hybrid and there are also a few superboosted. Small steps on the path forward. Glass Futures and the FEVE project are tangible demonstrations but who will commit their money first and how do we tackle the future energy costs? Time will tell.

Stuart Hakes is CEO of F.I.C. and President of the Society of Glass Technology

* The full version of this article appears in the Sept/Oct issue that has been mailed globally. The digital version of this issue can also currently be read free of charge in its entirety alongside back copies in the Digital Archive (sponsored by FIC) at https://www.glassworldwide.co.uk/Digital-Issues. To receive the paper copy, all future issues and a free copy of the Who’s Who / Annual Review 2021-22 yearbook, subscribe now at https://www.glassworldwide.co.uk/subscription-choice