A passion for glass celebrated at Madrid Phoenix Award ceremony

Professor Alicia Durán received the 49th annual Phoenix Award at a ceremony in Madrid this October, supported by colleagues and friends. In an acceptance speech that emphasised her passion and support for glass and for members of the international glass community, Professor Durán confirmed her commitment to achieve a series of goals while President of the International Commission on Glass. This involves the realisation of the ICG2030 project and support for the International Year of Glass 2022 proposal. The full version of this article appears in the November/December issue *. 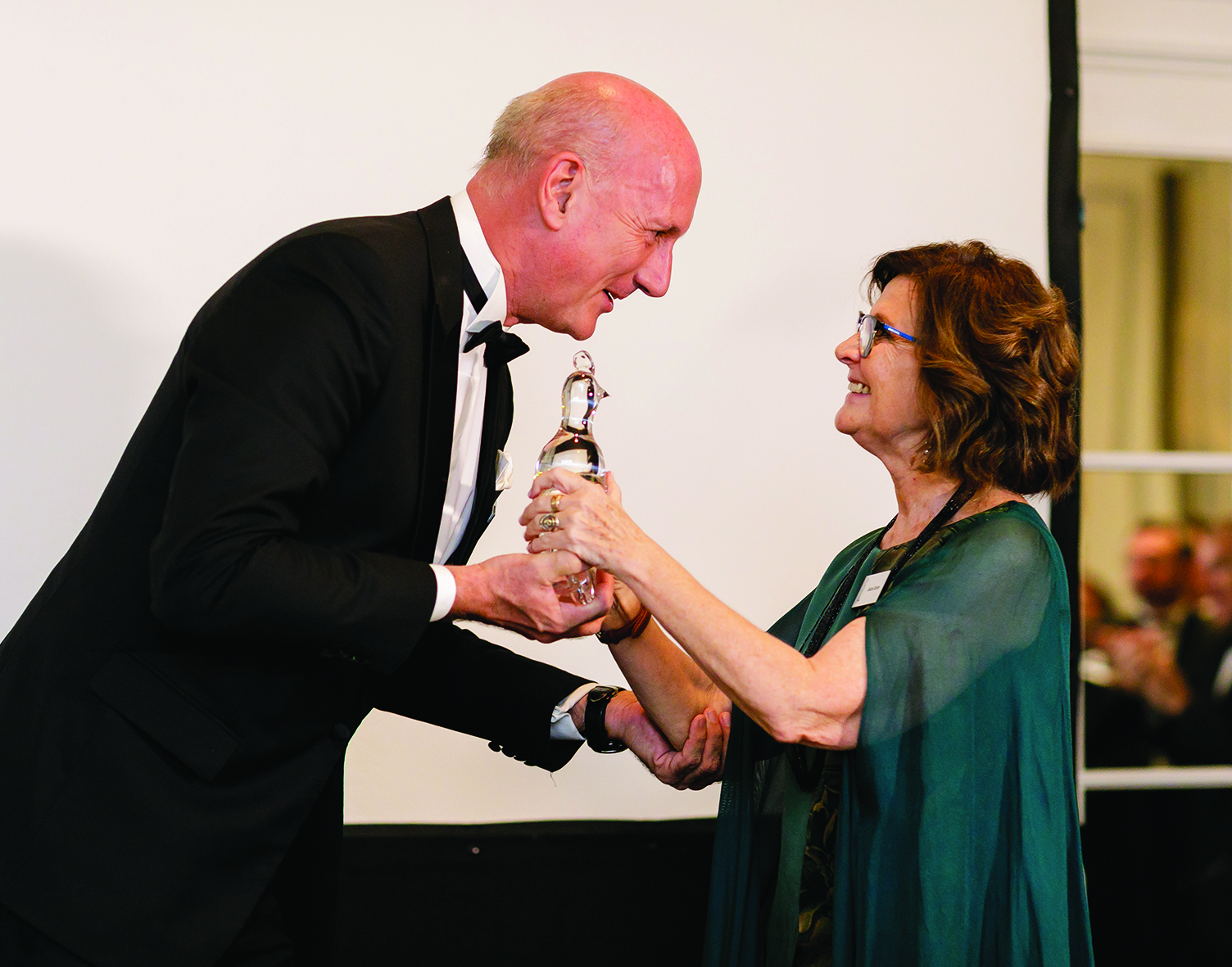 Professor Alicia Durán has enjoyed a highly successful career in the world of glass science and technology, bridging the gap between industry and academia. A Research Professor at CSIC, Consejo Suprior de Investigationes Cientificas (the Spanish Research Council), she has developed her entire professional career at the Institute of Ceramics and Glass in Madrid, Spain.
Highly respected for leading the GlaSS research group at the Department of Glass, she graduated in physics from the Universidad Nacional de Cordoba, Argentina, in 1974 and obtained a PhD in physics from the Universidad Autonoma de Madrid in 1984. In 1988, she was awarded the ICG’s Gottardi Prize for young glass researchers.

Under the chairmanship of Jean-Luc Logel of IRIS Inspection machines, the 2019 Phoenix Award Committee selected Professor Durán to receive this year’s prestigious award in recognition of her extensive work in the furtherance of glass, glass-ceramics and sol-gel materials research. This extends from basic research to applications in the industrial glass sector and for other final users of glassy materials. The work of her team embraces different materials and components for fuel cells and Li-batteries, transparent nano glass-ceramics for photonic applications and glass and glass-ceramic sealing. These materials come together with protective and environmentally-friendly anti-corrosive coatings, meso-structure films with photocatalytic activity and multi-functional sol-gel coatings.

Over many years, Alicia Durán has developed and maintained close collaboration with the Spanish and international glass industry. Much of her work has related to some of the industry’s most pressing issues, including the development of opportunities to enhance energy savings in furnaces, environmental issues and emissions control, recycling systems and the certification of food safety of glass containers.
“Co-operation and collaboration are key words that have guided my life” she explained during her Phoenix Award acceptance speech in Madrid. As well as maintaining continuous contact with the glass industry, positive relationships have been established over many years with research and development centres throughout Europe, North America, Japan and Latin America.

Professor Durán has been an influential figure within the Sociedad Espanola de Ceramica and Vidrio (Spanish Glass and Ceramics Society) and the International Commission on Glass for more than two decades. Elected ICG President in 2018, there are some important goals that she would still like to achieve. “ICG combines the ideals and goals of our founders with the emerging features of glass science and technology but if we want to represent the glass world, we need to change with this world” she commented.

“ICG2030 is our project to face the new challenge of ICG. We have to carry forward the work of international collaboration between glass technologists and scientists of the world and also to identify future directions for research and development.” Professor Durán emphasised that her ambition is to build a positive future for the industry and its products. “Glass is the transparent tool that allows building a sustainable planet with more developed and fair societies. But glass involves much more than science. It is also art, the history of this material sharing the history and evolution of humankind.”

As well as emphasising the importance of collaboration and internationalisation, education and training, the 2019 Glass Person of the Year stressed the importance of gender equality, both within CSIC and in the glass field generally. “Although women constitute half the undergraduate population, there is a continuous drop in the number of women at each level of academic or industrial careers” she explained. “We have to use different tools to help women achieve their full potential… women are half of the world and we have to become half of the glass world.”

Interestingly, Alicia Durán is the second woman to be elected ICG President and the second to receive the Phoenix Award. The standard bearer in both instances, Alev Yaraman, was present in Madrid to support her long-time friend as she received this year’s award. Mrs Yaraman was one of five previous Phoenix Award winners in the audience, the other industry luminaries being Surasak Decharin, Javier Gutierrez, James O’Callaghan and Helmut Schaeffer.

In her role as ICG President, Professor Durán also emphasised her support for a proposed United Nations International Year of Glass for 2022. “Extensive planning is now underway at an international level, involving scientific glass-themed societies, academia and industry, as well as museums and art societies.
“A United Nations International Year of Glass for 2022 will underline the technological, scientific and economic importance of glass. It is a transparent material that can facilitate the emergence of more developed, just and sustainable societies to meet the challenges of globalisation.”

Jean-Luc Logel, Chair of the Phoenix Award Committee for 2019, emphasised that Alicia Durán has made an outstanding contribution to the world of glass science and technology throughout her career and is recognised as a worthy winner of the 2019 Glass Person of the Year. “Her extensive knowledge is matched only by her great simplicity and exceptional generosity” he confirmed. “As a scientist and as a human being, Alicia embodies the PAC’s values perfectly.”

* The full version of this article appears in the November/December issue, alongside a series of exclusive interviews with industry figureheads, topical market reports, events round-up and technology updates. Subscribe now to receive the full paper and digital versions (subscribers receive a free copy of the Who’s Who / Annual Review yearbook!).