Several years ago, Eurotherm by Schneider Electric worked with leading glass manufacturers to develop the EPower controller, an intelligent electrical power management control solution. This SCR device is still very popular, both as a product and as part of Eurotherm power control system solutions, as René Meuleman and Amber Watkin explain. The full version of this article appears in the September/October issue *. 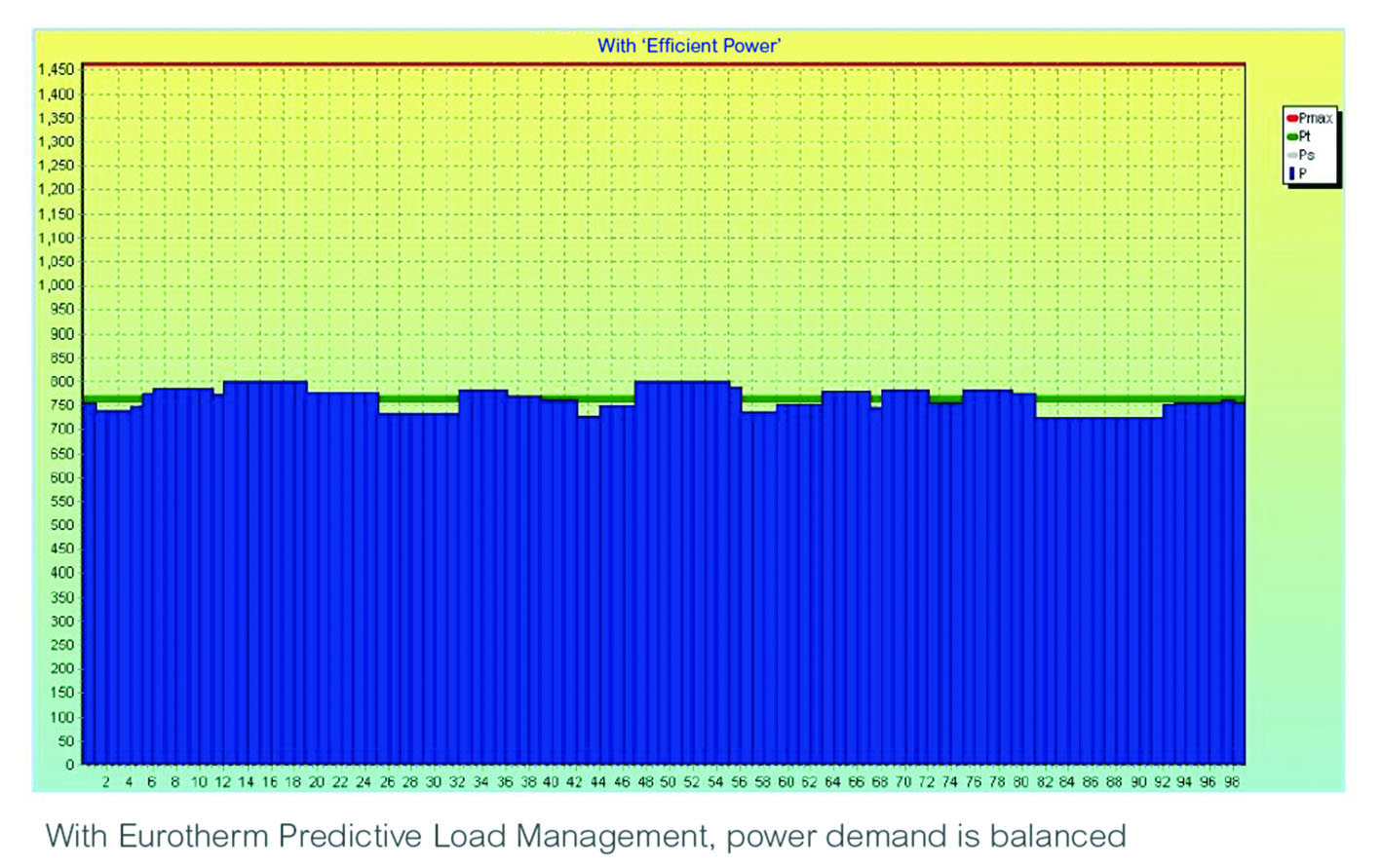 Utility companies apply a surcharge or calculate an additional cost into their kWh tariff when the power factor goes below around 0.9 (or if any agreed maximum power demands are exceeded). Over the course of a year, this can translate into thousands, or even tens of thousands of dollars, depending on the size of the installation. Problems caused by phase angle firing, such as harmonics, RFI (radio frequency interference), line losses, wasted energy (kVAr) and transformer overheating also result in the need for increased equipment capacity to compensate for these disturbances. For example, expensive active or passive filter systems may need to be installed.

Benefits of full cycle firing
If the application allows for it, the easiest way to increase the power factor is to step away from phase angle firing and start using full cycle firing, also known as zero cross or burst firing. In this firing mode, a modulation period is defined, within which the SCR is modulated with single or multiple full cycles according to the power demand.

Theoretically, full cycle firing will result in a power factor of 1 but due to unavoidable inductive loads from transformers and wiring, in a typical glass melting power supply system the overall power factor will typically be >0.9. By avoiding the phase angle influences, this type of system will run at the highest achievable power factor.

However, a downside to full cycle firing is that it can introduce a flicker effect (main voltage variation), which can in turn affect motors and create a visual disturbance (light flicker, similar to fluorescent lighting). This effect can become more severe in high power, multiple SCR controlled applications such as tin bath and annealing lehr heating, when running large numbers of zones. As these systems can easily contain more than 40 zones running at different power levels and variable setpoints, if not properly controlled, this may lead to large uncontrolled peaks of power. Thus, many zones randomly fired in time will potentially increase the risk of random huge peak power consumption.

If the overall power demand of a multi-zone system is not controlled, it also becomes necessary to design in a specific amount of power overhead, based on the maximum possible peak values and accepting the consequential additional cost. However, on existing installations where process improvements are being made, products are being upgraded or production capacity is being increased, the additional load may exceed the designed total power capacity of the installation. This can result in possible power overloads or black-outs.

The EPower power management system is based on a control module that can control up to four thyristor power stacks in a ‘PLC-like’ design layout. Up to 63 of these control modules can be integrated together via a fast network to become an intelligent power control system with the flexibility to effectively manage the requirements of both small and large-scale heating installations. These can range from glass bending lines, tempering furnaces and autoclaves, up to complete float glass baths, annealing lehrs and complex multiple zone furnace boosting installations.

How predictive strategies can help
In multi-zone systems using full cycle firing, the sophisticated Predictive Load Management can reduce peaks in power by balancing or sharing the demand across many loads automatically. It effectively ‘smooths’ the average power demand on the distribution, while still maintaining the desired power to each of these zones. It also optimises and limits the maximum allowable peak power demand of the system.

Conclusion
Improving the power factor to reduce energy waste, controlling the demand and reducing peak consumption during ‘on’ peak times can result in substantial savings. In addition, the predictive load management function helps to improve the quality of the main power supply, ultimately reducing CO2 emissions. The risk of power outages is reduced and extra remedial equipment is no longer necessary.

The Eurotherm by Schneider-Electric global glass team can work with customers at the early design stages to help them realise the full benefits, prior to installing a new infrastructure and negotiating energy contracts. As sophisticated SCR power control strategies can be complicated to understand, Eurotherm has provided a white paper containing more explanation on Predictive Load Management, available via the Eurotherm website glass solutions page.

Acknowledgements
The authors would especially like to acknowledge the contribution of Yves Level and Mikael Le Guern to the patented ‘Predictive Load Management’ strategy.

* The full version of this article appears in the September/October issue, alongside a series of exclusive interviews with industry figureheads, topical market reports and technology updates. Subscribe now to receive the full paper and digital versions (subscribers receive a free copy of the Who’s Who / Annual Review yearbook!).