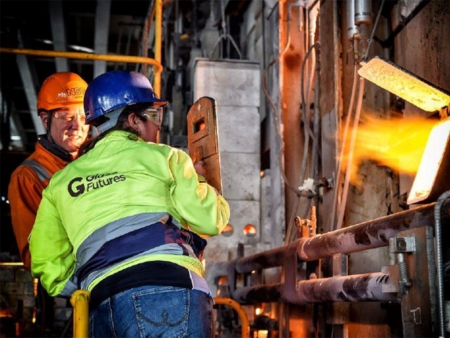 NSG Group have announced an increased target of carbon emission reduction by 2030 as part of the company’s commitment to achieving carbon neutrality by 2050.

In October 2019, the Group had set a target of reducing GHG emissions (Scope 1 and Scope 2) by 21% compared to its 2018 levels by 2030 as certified by the Science Based Targets Initiative and work has been taking place in line with the targets.

At the same time, the Group has been working to achieve a 2% annual reduction in carbon emissions (Scope 1 and 2) during the three-year period of the Company’s Revival Plan 24 to 2024.

The company has now decided to raise the carbon reduction target by 2030, which is more important for achieving carbon neutrality, from 21% to 30%, and to set more concrete and feasible additional measures.

The following measures will mainly be implemented to achieve the new target by 2030 and carbon neutrality by 2050.

Scope 1 (Direct Emission) Improvement of Furnace Energy Efficiency: design changes to ensure optimum efficiency technology is installed at furnace repairs; digitalization of furnace operation utilising techniques such as advanced data analytics and AI to maximize efficiency; increase cullet consumption; increase the proportion of non-fossil fuels, such as hydrogen and biofuels; and roceed with small-scale electric melting until 2030, expanding this toward 2050.

In addition to the measures above, NSG Group will promote the development of new technologies through disruptive innovations, such as 100% zero-carbon fuels such as hydrogen; carbon capture, storage and utilisation; and the use of alternative glass raw materials.

Image: NSG Group have increased their commitment to reducing carbon emissions by 2030 with hydrogen and biofuel tests at Greengate, St Helens the proving ground.