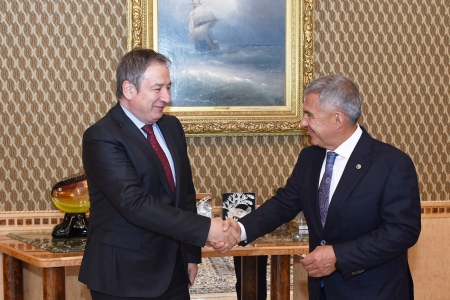 Sisecam Group Vice Chairman and CEO Professor Ahmet Kırman has been honoured by Rustam Minnikhanov, President of the Tatarstan Republic of the Russian Federation (pictured) with a ‘Medal for Valorous Labour’, in recognition of his valuable contributions to the economic co-operation and the development of investments.

The group has an annual production capacity of over 1.5 million tons in the Russian Federation and the total sum of its investments is over $1.2 billion. This includes flat glass

A flat glass plant was established in 2014 in association with Saint-Gobain via an investment of $210 million, with a capacity of 230,000 tons/year. A 100% Sisecam investment, the automotive glass plant cost $100 million and has an annual production capacity of 3.2 million square metres. Currently, Sisecam’s total investments in Tatarstan amount to $350 million, along with additional and sustained investments.