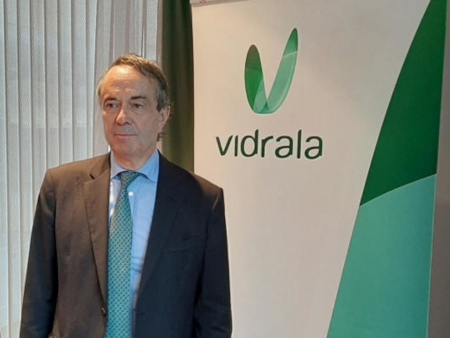 The Department for International Trade in Spain rewarded 14 British and Spanish companies at the UK-Spain Business Awards 2021.

Leading producer of glass containers for the Food & Beverage industry Vidrala won the ‘Growth in the UK’ category at the virtual ceremony organised by the British Embassy in Spain and hosted by British ambassador, Hugh Elliot.

The award recognises the investment effort made by Vidrala in the UK since its acquisition of Encirc in 2015. Since then, the company has deployed over £150 million for projects in the UK.

One of Vidrala’s most ambitious initiatives in British territory is a programme to rebuild furnaces and equip production lines with new technology and in Elton, Cheshire, the company has developed the world’s largest glass container furnace. In addition, Vidrala and Encirc have participated in a ground breaking trial to make bottles from 100% recycled glass using only the energy from burning ultra-low-carbon biofuels.

Chairman of Vidrala Carlos Delclaux (pictured), who attended the virtual awards gala, said: “I’m thrilled to receive this award and would like to give a very special thanks to the great work carried out by Encirc in the UK, contributing to add value to Vidrala as a group. Due to its great potential, UK is one of the most relevant markets for us. Even in times of Brexit and pandemic, the UK has shown great strength and growth potential. We are very honoured for this award that is to some extent a recognition of our efforts and faith in the UK.”