Sample from the latest issue

Over the past three decades, Guangdong Huaxing Glass Co Ltd has emerged as one of the world’s principal glass container producers, with 14 manufacturing sites in mainland China. The company’s founder and Chairman, Mr Li Shenhua has guided the organisation to its market leading production capacity of almost four million tons per year, with a strong emphasis placed on the adoption of advanced manufacturing technologies. 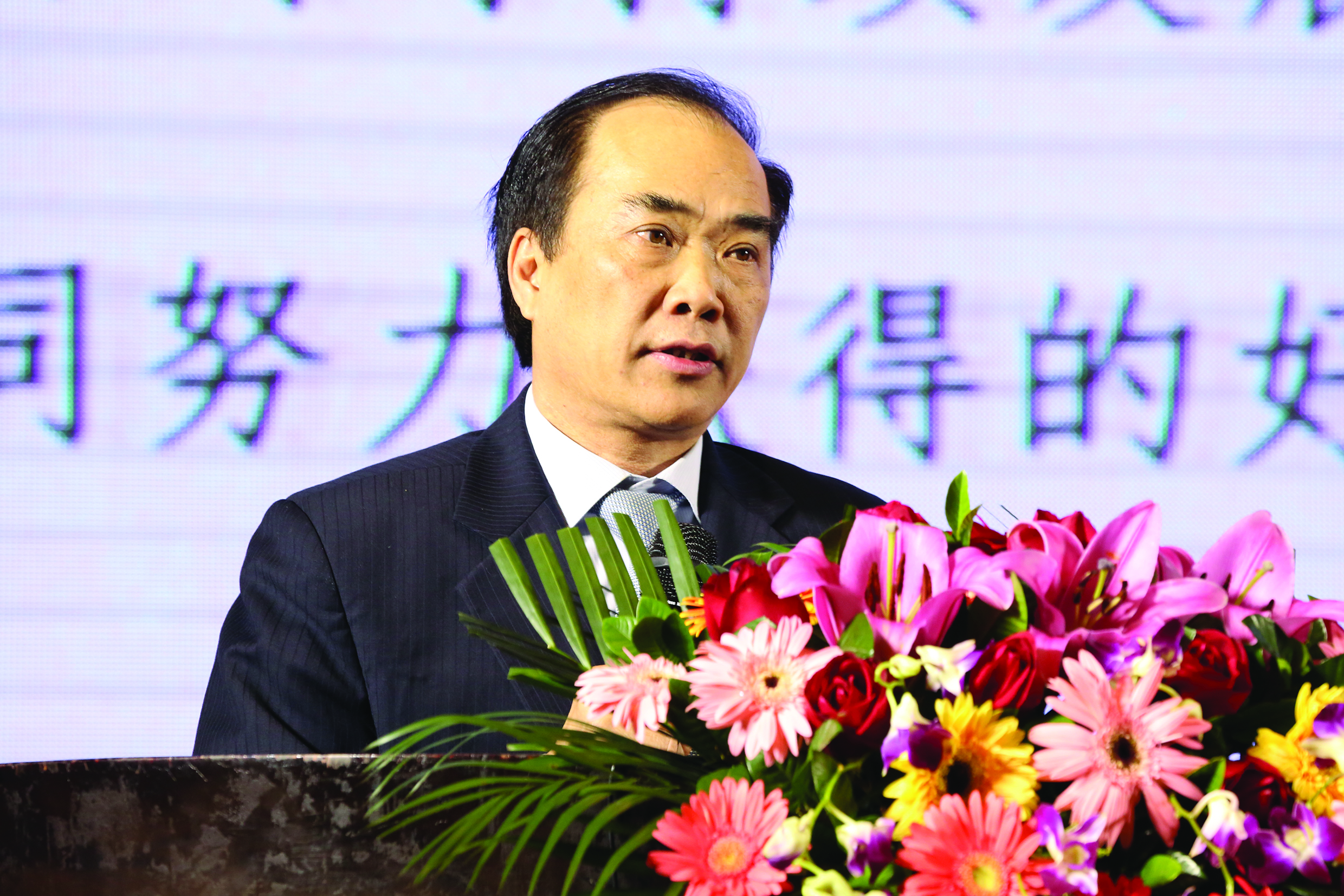 Guangdong Huaxing Glass Co Ltd is Asia’s largest glass container manufacturer, boasting 14 production sites and nearly 10,000 highly experienced employees. This privately-owned business has an annual production capacity of nearly four million tons and annual sales of more than six billion yuan, accounting for approximately 25% of the domestic market. Among the company’s products are glass containers for the food, beverage, pharmaceuticals, cosmetics and other industries, primarily for local consumption but with about 6% of sales exported to North America, Europe and South East Asia.

The company has taken an important lead in mastering computer-controlled technologies for triple gob production, narrow neck press and blow methods and lightweighting. Advanced furnace control systems have been adopted, alongside fully automatic inspection systems, automatic control technologies for electric heating and gas firing in the melting and conditioning phases, as well as the latest hot and cold end coating technologies. As a result, Guangdong Huaxing Glass can produce glass containers in weights of 25g-2000g and capacities from 20ml to 5000ml, in all shapes and quantities. The colour palette produced extends from ultra white and clear compositions to emerald green and tawny brown, with more than 3000 different container designs included in the current product portfolio.

Born in Nanhai, Guangdong Province in 1956, Mr Li Shenhua has developed an unbreakable bond with glass since the start of his career. Having completed primary and secondary education in his hometown and after attending Luocun No 2 High School, his thirst for knowledge continued after working for several years, with studies at South China University of Technology in Guangzhou, Victoria International Business College in Hong Kong and EuroPort Business School leading to the award of a Doctorate in Business Administration.

The personal association with glassmaking began in 1972, when Mr Li worked as an electro-mechanical technician for a glassworks in Wuzhuang, Luocun, in the Nanhai district of Foshan, Guangdong Province. Seven years later, he was among the founders of Fulv Glass Co in Shunde, Yonghan Glass Co in Longmen and Liudu Glass Co in Yunfu, before becoming President of a business in 1987 that ultimately became Guangdong Huaxing Glass Co Ltd.

Dedicated attention to constant learning, combined with the development of practical experience, helped him to master the techniques of glass container production and create a clear insight to the industry’s future direction. The family had encountered challenging times during the Cultural Revolution and as such, Mr Li Shenhua endured various trials and tribulations throughout his school years. This painful experience gave him perseverance, however, coupled with determination and courage to dream big in the face of adversity!

Wuzhuang Huaxing Glass Factory, the forerunner of Guangdong Huaxing Glass Co Ltd, was established in 1987, with a registered capital of more than 100,000 yuan. Mr Li had a lifetime ambition to build this company into a world class player in the industry, an objective that has subsequently been realised. Having originally benefited from the guidance of his father to create a successful life in the glass industry, today Mr Li’s goals are to consolidate the company’s domestic development, while creating an outstanding international presence.

As President, Chairman of the Board of Directors and head of the company, his responsibilities are founded on organisation, co-ordination and representation. This includes presiding over the Huaxing Glass management committee to determine development plans, business policies, annual plans and major daily management issues. The President has the authority to make decisions about the company’s major business and administrative issues, in addition to those required by the articles of association, to be determined by the general meeting of shareholders and Board of Directors.

Among the most rewarding aspects of this role has been the opportunity to learn more about management and the constant development of associated skills through daily responsibilities, including personal interaction management issues. And among his greatest challenges has been the ability to open global markets on the company’s behalf.

With nearly 10,000 employees, Huaxing Glass is able to call on a rich vein of management and production experience. The company has a core management team of 70 people (including management trainees), 25 of whom have bachelor’s or master’s degrees. This includes Luo Jinkun, Zeng Xueqin and Gao Zhendong, whose combined expertise embraces the critical areas of business management, production technology and product quality.

Over the years, members of the senior management team have been responsible for the development of several important patent applications that relate to the glass container manufacturing process. This includes an automated production line for the high speed conveying and management of bottles, cooling technology for air cylinders, a special blowhead for IS machines and a clamping mechanism for glass moulding.

With 14 production sites throughout China, Guangdong Huaxing Glass is by far the country’s leading glass container manufacturer and the largest in Asia. Headquartered in Foshan City (Guangdong Province), the company’s factories are located in Guangdong, Hubei, Henan, Fujian, Jiangsu, Hebei and Xinjiang, as well as in other provinces, cities and municipalities. This highly inter-connected organisation enables the company to respond quickly to fluctuating market conditions and customer demands.

Apart from an advantage of scale, the company differentiates itself from competitors in various ways, based on its ability to deliver stable quality, technological leadership and a sustainable development philosophy. A complete quality management system has been developed and strategic partnerships built with leading companies in different industries to provide customers with essential quality assurance, while its market leading technologies include advanced international equipment for production and inspection, an independent design team and technological co-operation with key foreign companies. The lightweighting technology implemented is described as the most advanced in China and in terms of its sustainable development philosophy, the company is a pioneering advocate for clean energy in the industry, reacting positively to increasingly more stringent environmental protection policies.

Among the latest major investments at Guangdong Huaxing Glass are important projects in Harbin and in Putian, Fujian. Because the original Foshan plant has already been expanded to its maximum capacity, with no space left for further development, the company has recently invested in the nearby Sanshui production site. A second melting furnace and production hall were commissioned in June 2018, delivering an annual capacity of 150,000 tons, employing manufacturing technologies that match some of the world’s best. And further major projects are in the pipeline, with important investments set to be realised in Harbin, Putian, Fujian and Rongchang, Chongqing.

The glassmaker’s approach to environmental issues is to comply with relevant laws and regulations, conserve energy and reduce consumption, while creating a green economy. It actively adopts environmentally-friendly facilities to reduce emissions and has invested nearly 300 million yuan to build 25 installations for NOx and SOx removal and 13 facilities to treat wastewater. These facilities have contributed greatly to emissions reduction.

According to the company, 100% of waste glass bottles are recycled, while 100% of the wastewater from glass cleaning is recycled after treatment. Opportunities for waste heat utilisation are explored in detail and the use of clean, waste cullet is promoted vigorously. Furthermore, more than 95% of packaging materials used at its various glassworks are recycled, while documents to control the quality of incoming raw materials have been formulated to reduce the generation of waste at source.

Led by Mr Li Shenhua, the Guangdong Huaxing Glass management team anticipates a promising future of sustainable development for glass packaging in China, thanks to the material’s many advantages compared to alternative packaging types.

It is acknowledged that further improvements still need to be made for the group’s manufacturing technologies to become truly competitive in international markets, however. In addition, international trade conditions need to be stabilised to deliver consistent success. Guangdong Huaxing Glass plans to be a dominant player in the market for many years to come, not only in China but servicing the needs of clients throughout the Asia Pacific region and beyond.