Exports could bring Russian float sector back on growth track

Reportedly, some of Russia’s biggest float glass plants are considering expansion plans, as exports show signs of growth and as margins increase. Vladislav Vorotnikov reports. The full version of this article appears in the May/June issue that has been mailed globally and is also available now free of charge in the digital archive*. 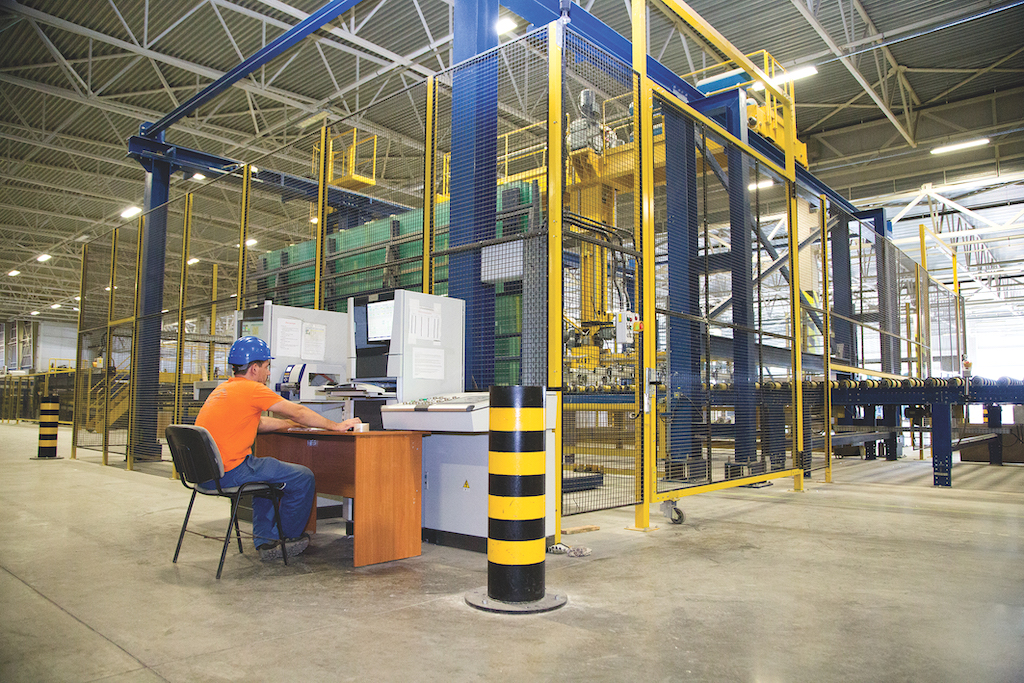 The Russian float glass industry’s production performance remains stable, despite flat sales dynamics in the domestic market. Estimates from the Russian State Statistical Service, Rosstat indicate that during the first 11 months of 2019, Russian plants manufactured 222.9 million square meters of float glass. This was 0.2% up compared to the same period of the previous year.

In financial terms, production has grown by between 12% and 15% annually. The shift is driven by the industry’s improved effectiveness and a slight change in local demand towards higher added value products. This is according to research conducted by the Moscow-based think tank Vestnik Stroy.

Innovations in the spotlight

In recent times, growing revenue in the industry has been associated with increased demand for low-emissivity glass. “The emissivity parameters of translucent structures have significantly improved compared to the solutions applied 15 years ago” said Alexander Kruglov, Product Manager at the Russian float glass company SP Glass.

Demand for premium float glass in Russia is growing because, among other benefits, it prevents frost penetration. The product is in high demand in the harsh conditions of the Russian climate, according to Mr Kruglov. “Glass is increasingly popular as a cladding for buildings and Russian glass plant marketing departments are putting in a lot of effort to give additional momentum to this trend.”

It is believed that the Russian float glass industry will continue to shift towards innovative products, including bird-friendly, low bacteria growth and smart glass innovations. This requires the plants to allocate investments in order to keep up with market demand. “From a technological point of view, this (shift of demand towards innovative float glass) would prompt glass companies to expand their equipment fleet” commented Dmitry Bernt, a spokesperson for Pilkington Glass Russia. “Russian companies are also looking to embark on new technologies to produce ultra-thin rolled glass, multi-component and composite materials.”

However, according to Victor Osipov, President of the Russian glass industry association StekloSouz, the growth in demand for innovative products in the Russian glass industry is not fast enough. “One of the main problems typical for the entire (Russian) building materials industry is a lack of demand for modern, high quality products. While manufacturers allocate significant resources to secure the quality and safety of their building materials, the construction industry is not always reciprocating. It is no secret that Russian builders frequently opt to use, in the first place, cheap building materials, sacrificing quality and safety.”

Legal changes are necessary in order to discourage construction companies from using the cheapest building materials. “The existing technical regulations in Russia do not encourage the use of modern types of float glass in buildings, especially for the purpose of higher safety. Because of this, glass with increased strength and fire protection glass are not used widely. It is necessary to develop and adopt appropriate regulatory documents, making the application of safe, high strength glass mandatory” Victor Osipov commented.

In 2016, together with key glass plants and leading Russian scientific institutes, StekloSouz formed a working group called ‘Industrial processing. Fire protecting and safe glass’. Its main purpose is to promote the more active use of innovative glass in the industry. Conversely, some people believe the demand for cheap float glass in the Russian market is only a temporary phenomenon. The purchasing power of the Russian population has not grown since 2014 due to a cocktail of different factors, including western sanctions introduced against several segments of the Russian economy and price fluctuations for hydrocarbons in the global market. “At some point in the future, when economic growth resumes, we will be able to introduce all the innovations accumulated in the glass industry” said Victor Osipov.

Russian flat glass plants are estimated to have increased their export performance to 55 million m2 in 2019. Furthermore, factories commissioned within the past decade have secured almost complete import replacement in the local market; now, imports account for less than 5% of all sales. “Float glass is one of the few Russian building materials that is competitive in the global market” the StekloSouz President confirmed. “The geography of Russian float glass sales is very broad and includes CIS countries, the European Union, the Middle East, Africa and Asia. It was exports that allowed Russian glass plants to maintain their production performance, when local demand slumped by 35% a few years ago.”

According to Mr Osipov, exports will continue to represent an important factor of the industry’s future growth plans. “Right now, Russian investors are planning to build two new float plants in the country, each with a production performance of 600m2 per day.” Additionally, the largest Russian company, Salavatsteklo is considering building a float plant in Novosibirsk Oblast, Russia. Citing its own sources, Russian newspaper Kommersant said that the daily designed production capacity of the plant is expected to be 800m2, while the cost of the project is estimated at $200 million.

By 2030, the Russian industry is expected to have almost doubled its annual production performance to 500 million m2 of float glass, according to forecasts issued by StekloSouz in 2017. This means that Russia is likely to beat the record of 300 million tonnes of float glass set in the Soviet Union in 1985. Several glass plants have reported plans to increase export levels, including Caspian Glass Plant, who boosted sales by 20% in 2018, launching export initiatives to Albania, Greece, Lithuania and Romania.

Pilkington Glass Russia began exporting glass in 2016 and last year, the company sold 40% of its float glass to non-Russian customers, according to Roman Tarasov, Export Development Director. “We pay a lot of attention to planning delivery times, as we are located in Russia and need to supply glass to all continents throughout the world. So far, delivery time is not among our advantages, compared to competitors located closer to customers.”

The continuing sanctions war between Russia and western countries raises concerns about the future prospects for some industries, where the presence of foreign capital is considerable. The float glass industry is among them.

“Certain concerns emerge because of the continuing concentration of high-tech production capacities in the hands of foreign financial and industrial groups” commented Victor Osipov. “Today, Japanese companies control about 40% of float glass production in Russia. These corporations also hold the world’s most modern technologies, scientific and technical developments in the glass industry and the rights to use them.”

In solidarity with G7 countries, Japan imposed sanctions on Russia in 2014, following its annexation of Crimea and the destabilisation of eastern Ukraine. A broad range of different companies in Russia, including some in the construction sector, have been subjected to international sanctions. Foreign companies are not allowed to do business with them, under a threat of so-called secondary sanctions and this may pose certain problems to sanctions-hit businesses.

Separately, concerns have been raised that Russia’s float glass industry could be heavily impacted by the problems of Bashkir Soda Co, the biggest producer of soda ash in the post-Soviet era. Bashkir Soda Co produces 2.2 million tonnes of soda per year. Reportedly, the company may cease operations in the coming years, since its current raw materials sources will be depleted in 2022. There are no other suitable material resources in Russia, except in the Tratau Mountains, although no industrial operations are allowed in this territory.

* Alongside exclusive interviews with AGC, Ardagh, Gürallar, Ishizuka, Nihon Yamamura, NSG, Saint-Gobain, Toyo Glass and much more, the full version of this article appears in the May/June issue that has been mailed globally. To increase accessibility and visibility of all our content in the current environment, for the foreseeable future the usual subscription fee for Glass Worldwide’s digital archive (sponsored by FIC) has been waived, meaning you can access free of charge the May/June digital issue now in its entirety alongside back copies at https://www.glassworldwide.co.uk/Digital-Issues. To receive the paper copy and all future issues, subscribe now at https://www.glassworldwide.co.uk/subscription-choice.